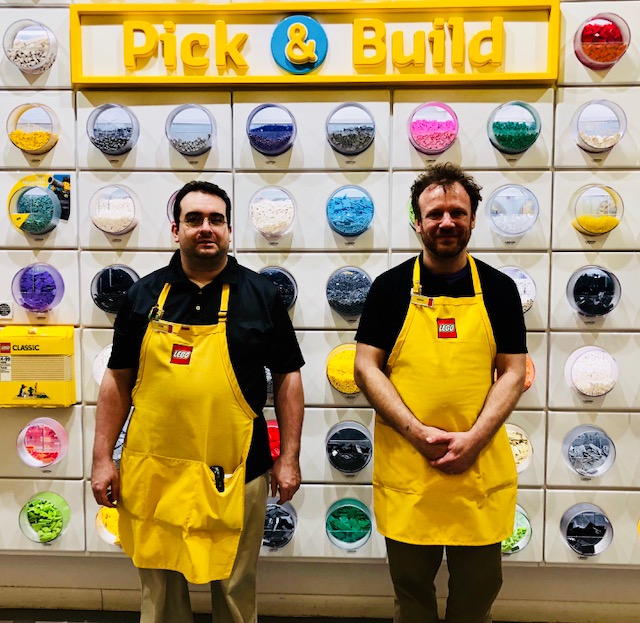 Wouldn’t you know it that just days after posting about uninspired environments (see Malls), I had a rather wonderful experience inside of just such a place.

My youngest daughter is healthily obsessed with Lego, especially their collection designed for the younger (seemingly female) set, called Lego Friends. I mean healthy because she wakes up early to do Lego, she goes to bed thinking about Lego, she asks for sets by name for every occasion or holiday — and when she’s in the middle of a build — nothing can get in her way.

On a recent Saturday, we found ourselves sans schedule – and she asked if we could super pretty please go to the Lego store…at the mall. Normally, I might invent any excuse to avoid this excursion, but the day was unusually open — I could make her really happy — and she wanted to buy herself a birthday present with money saved from her allowance. So, game on.

The last thing I expected to encounter on this excursion was a dynamic duo of super fan sales associates who’d landed the ultimate gig in their mind; selling Lego. Unlike the catatonic attitude that plagues many mall-based retail employees, these two grown men were eager to explain scenes, sets, and models, suggesting ideas from other collections for unique “builds.” Not only did they know everything there was to know about the Friends collection (definitely not their demo), they exchanged stories of their own Lego projects at home, even down to which characters loved what and what pattern was on whose bunk bed.

This may come off as slightly odd (I had a thought or two), as most adults see Lego as a children’s activity that is ultimately outgrown. But these gentlemen took great pride in their roles, even in educating us about the lifespan of Lego interest. Apparently, it stops around 12 or 13 but then picks up again approximately 15 years later. (Considering how many of these things we have in our playroom, what I really wanted to know was how long it takes for Lego to accrue enough value to become a vintage collector’s item.)

It is refreshing to see people who, even at an hourly wage, totally and completely love the products they sell. They won me over, so much so, that I will no longer be buying Lego at the much-more-convenient online superstore with a free shipping membership, but instead, will actually seek out ….the mall. Why? Because it’s more fun!

And, in case you were wondering…Lego — even when it’s plural — is always Lego. And if you really consider yourself a fan, it’s LEGO. #themoreyouknow.