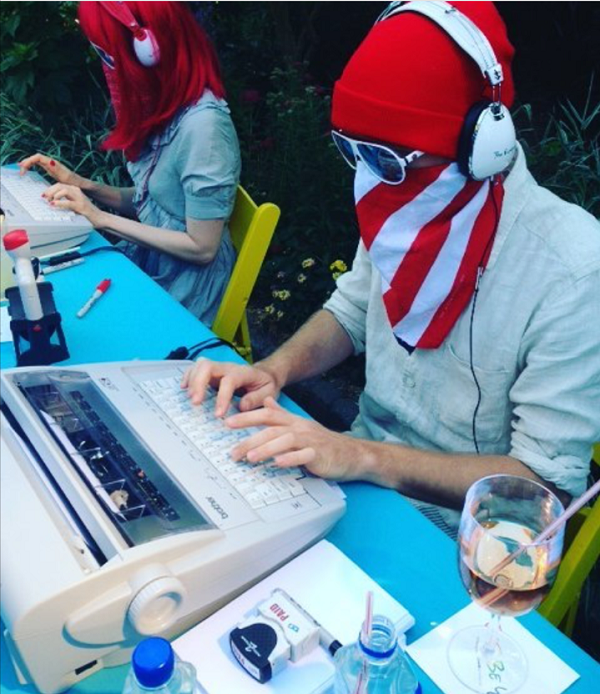 Like some of you, I operate in the feedback space, constantly and methodically evaluating what is working and what isn’t. But this post is about an entirely different sensation; being a goofy, unrestrained, unadulterated fan; being swept away in the perfection of a thing, and seeing it for all the good that it is.

As consumers, we need unapologetic fan moments more than ever. Having posted about being a Downseller (and wow there are a lot of you), this one is a confession about the value of falling in love – as a fan, follower or customer.

My own fan moment came recently at a party in Malibu, with the performance artist duo The Bumbys. Incognito in their red white and blue gear, behind electric typewriters, wearing noise-cancelling headphones, accompanied by their handler, they silently deploy “fair and honest appraisals” of party-goer’s appearances. Their astute, aspirational index-card write-ups are printed on the spot, and handed over after about two minutes of focused typing and hand proofing (and presumably observation, which you can’t really see from behind their sun glasses.)

I fell hard for Gill and Jill Bumby.

Conceptually, I want to be a Bumby. Giving prophetic, colorful, reassuring feedback to complete strangers, while in costume, describes my dream job.

But as a participant, standing there – vulnerable – staring down the barrel of someone else’s opinion, was initially unnerving. You’d think the appraisals would lean toward “honest” in a possibly snarky direction — but it was the opposite. Throughout the evening as we (guests) exchanged index cards, comparing our write-ups, the universal sentiment was heartening — each felt poetic, personal, and even better, strangely true! Imagine all the people they’ve assessed, walking around with these insightful, deftly nuanced self-approval ratings. #genius.

Being a fan means losing your suspension of disbelief, and letting a person, product or concept, steal you away from the expected. In its unique resonance, these experiences reassure us that something is very right in the world; A signpost, however infrequent, we all need.

As business owners, most of us aim for amazing, but acknowledge that it takes a lot of hard work/time/attention to elicit that effect. Which is why, when someone or something moves us intellectually, emotionally, spiritually (or all three,) we gotta lose the pretense of “mature” and “professional” and just bow down, and give it up, if we feel it.

I restrained myself from asking The Bumbys for an autograph, but did work up my courage for a photo. Couldn’t help it, and didn’t care. Losing our cool factor in exchange for earnest fanship is one of the last vestiges of our innocence.

Go ahead, write a love letter. It feels really good.