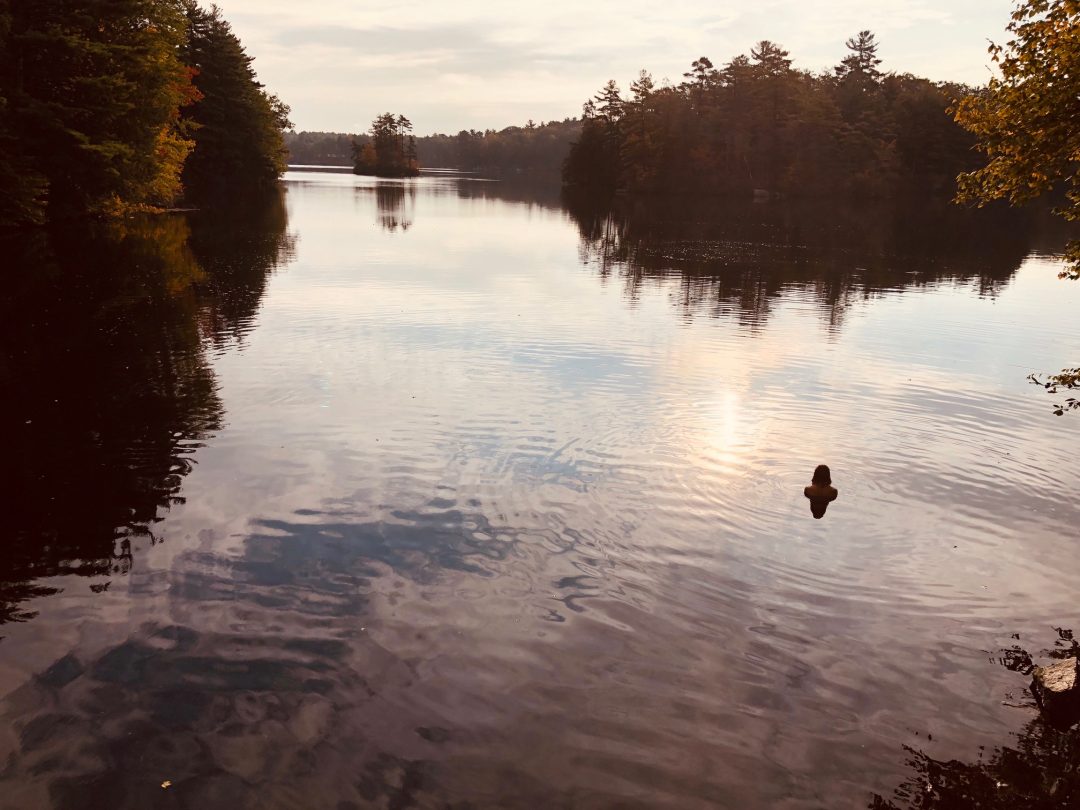 I often look to the natural world to help remind me that everything… is a reflection of everything. Like so many, I am often drawn to the river as a metaphor – a wordless guide for how to think about what comes (or goes) in life.

To be water rushing and winding over stones, whose edges have been rounded by time.
To flow effortlessly through a steep gorge or dense pine forest.
To know where to go next, without question.

When I can’t identify a feeling, can’t pull the answer from a canon; when the walls are too close or the infinite too formless – I often think of the river.

I don’t spend enough time near one, but just the thought of its continuous movement helps me make sense, make meaning, make peace – even make less unnecessary effort. Thinking of a river’s purposeful, yet entirely unconscious mission – a mission met just by existence itself – is as mesmerizing as it is calming.

These past months, as they’ve rolled on, have only occasionally resembled a river for me. That unmistakable sense of motion, and progress – has been fleeting. Although initially life slowed down (to the joy of introverts everywhere), delivering an unexpected pause and reset, it was only a matter of time before the days recalibrated to a different kind of fullness, albeit with a new cadence and revised schedule. As dinner called for invention (a nightly magic show) and projects required attention (despite hourly stops and starts), I felt – and am – busy.

But not busy in a jagged, harried way – although the demands of this changing home life / work-life / inner life / creative life present new ebbs and flows. It’s something else. It’s a persistent feeling, like a whisper of disorientation – of internal deceleration. A longing to be carried (rescued?) by the reassuring current of new ideas, fresh energy and encouraging patterns. To feel somewhere versus elsewhere; to find the chi.

When I’ve asked myself “what’s wrong?” I’ve struggled to identify it. Despite the optics – relocating across the country with my family, closing one part of a business and resuscitating another – the conversation with myself had become eerily anesthetized.

Is it that now – with scant mental mile markers – I feel “lost”? Or is it more like “unmoored”? “floating”? “rudderless”? It’s not stagnation, nor depression, yet there’s a perceptible sensation of weight; of drag. Maybe because, like everyone, I’ve had to reconsider my personal mileage – to establish new types of milestones, to consider how “productivity” (unfortunately) supports my self-esteem, or how I rely on variety to clarify purpose.

I fully recognize that I’m not alone in this.

I’ve reasoned that because my professional work is to create narrative and “story,” those same devices feel central to how I remember, and make sense of, my own timeline. Just as looking at a brand’s mode of expression requires looking inside it, and often to its history, in order to create the “now,” maybe I personally need to thread the needle of the past in order to establish coordinates for my present (and to understand why). For me, they appear as little maps with roads – each with discernible topography and signposts, weather patterns and surprises. They’ve always been full of left turns and off-ramps, diversions and invitations.

Without them to trigger “next”, my compass has almost felt broken.

What is so appealing to me about the call of the river, so unequivocal and desirable, is direction. There’s no sideways or backward; no wind that takes it one way, one day, only to reverse the next. It rushes, curves and meanders…sometimes with disarming ferocity, and at others with an easygoing smile. But always forward. No matter how the riverbed or surrounding landmass impacts the pace, it makes its way… forward.

Except!
(this was my exhale…)
Except for the eddy.

Eddies: Sections of the river that actually move upstream. Eddies are created when the main current flows around an obstruction and as the main flow of water continues downstream, some water backs up on itself to refill the space left behind the obstacle.

Trapped in the eddy is how I have felt.
Oh what. A. Relief.

To know that the seemingly, most synchronous organisms have a coping mechanism for some immovable element introduced to the environment; that what appears to be a separate phenomenon is actually just a confluence of events that lead water one way… until some catalyst (natural or constructed) folds it back into itself. That. Is. It.

Of course, even the river has a history – if you look. It’s not as though the impact of space and time doesn’t exist in its clarity or opacity, with subtle (or obvious) impressions throughout its ecosystem. But it doesn’t possess that human need to derive narrative from it – to weave the past to the present as a means to better understanding today or tomorrow. It goes one way, on all days – except for when it can’t – in small pockets. It doesn’t need to review yesterday or ask directions for tomorrow.

My favorite part of understanding the eddy’s role in the river is that the lodged water will always be swept back into the movement, because it was never separated from it to begin with.

That water never “disappeared” so it’s not as though it needs to “come back.”
It was, in the simplest terms, adapting.

This small but meaningful epiphany caused a shift, one that freed – and paradoxically – re-anchored me. I felt my energy change shape – and just like that…I was back in the flow.

Getting out of the eddy had nothing to do with strength or muscle, nor strategy, nor even much thinking or grand act of mental gymnastics.
It was less seeking, more surrender.
It was less arranging, more allowing.
These takeaways won’t surprise any regular reader of this work, of course.

Looking for the current, waiting and angling for it to come get me, was actually swimming against it.

The eddy is the solution, not the problem.
What a thing to discover.