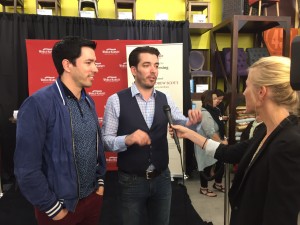 I was recently tasked with interviewing Drew and Jonathan Scott – of HGTV’s Property Brothers fame – at a World Market store opening. I’ve probably interviewed in the hundreds of people at this point – whether for SMARTY panels or profiles in magazines – and there is one thing that continually distinguishes people. It’s professionalism. These brothers could have shown up to a suburban mall, in the middle of kind-of-nowhere – and phoned it all in. Sure there were hundreds of fans waiting in line to see them, and media crews everywhere, but let’s be real – it’s a job for them, on a Sunday, when they could be watching football or doing whatever they do on weekends.  Yet they brought their game. And they were on time. They were tight. They were funny. They were focused. They promoted the store perfectly. They gave soundbites. They joked with one another – even though those are probably reusable jokes – they brought it. They made my job so easy I barely felt like I worked. But that’s what professionalism is. It’s not only showing up on time with your hair brushed and a copy of the agenda, it’s knowing what you need to deliver in order for people to be happy. Some people get that and some people don’t. It doesn’t matter how small the client or how small the job. It all matters. Yes it matters to your client or fans or audience, who might actually tell you if you suck (or they might not which could be even worse), but it matters mostly because the more you do everything with your everything, the better that everything gets. It’s habitual.

Let’s not ever get in the habit of a B game. It’s not sexy, it’s not where legacy and impact live, and when given the choice, wouldn’t you rather know yourself – like that?