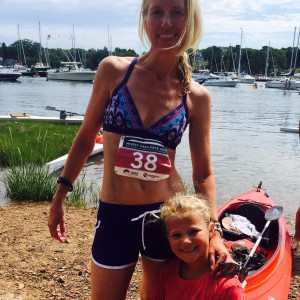 This past weekend I paddled around Misery Island in Manchester, MA, where I live, in a race that my husband created and directed called The Misery Challenge (what a name!). Last year at this very same time, at this very same race, I had been without a voice for 3 months, was so thin I could barely make it up a flight of stairs, and could be found on most days lying down – searching for answers about why I was so sick (misery pretty much describes it). By September I was hospitalized at Mass General in Boston, quarantined in a negative pressurized room, and diagnosed with….tuberculosis. So unlikely. So surprising. So strange. I’m still trying to put the pieces together of why and how that happened to me – but mostly I marvel at how far I’ve come and how grateful I am to be healthy, strong and able to kayak 4 miles around an island with choppy waves and the force of the Atlantic behind it! But it’s not an accident either.

I share this because my prognosis for healthy, strong lungs was not good – even though TB is usually curable. Would I ever be able to run? To walk up a hill? To dance all night? With less than 50% lung capacity toward the end of my treatment, my pulmonologist gave me a prescription – and it was to exercise daily for 45 minutes – breathlessly – no matter what.

So, I’ve been doing that. And now I see what he meant. I feel stronger and better than EVER, with a renewed perspective on my life, my work, my relationships. He knew that even though my capacity couldn’t really increase, my FUNCTIONALITY could. And I thought  – what a metaphor! Some of us can’t become bigger or more of what we already are – but we can function or perform at a higher level – which usually means more of whatever we want, and better versions of it at the same time.

A singular focus on a goal, done daily, yields results. But as he said, it’s the “100% rule. That means just that. Every. Single. Day.”

What single thing can you commit to?? Please tell me. It will encourage me to stay on the path. It can be personal or professional. Just share it. And if you’ve already committed, I’d love to know your results!