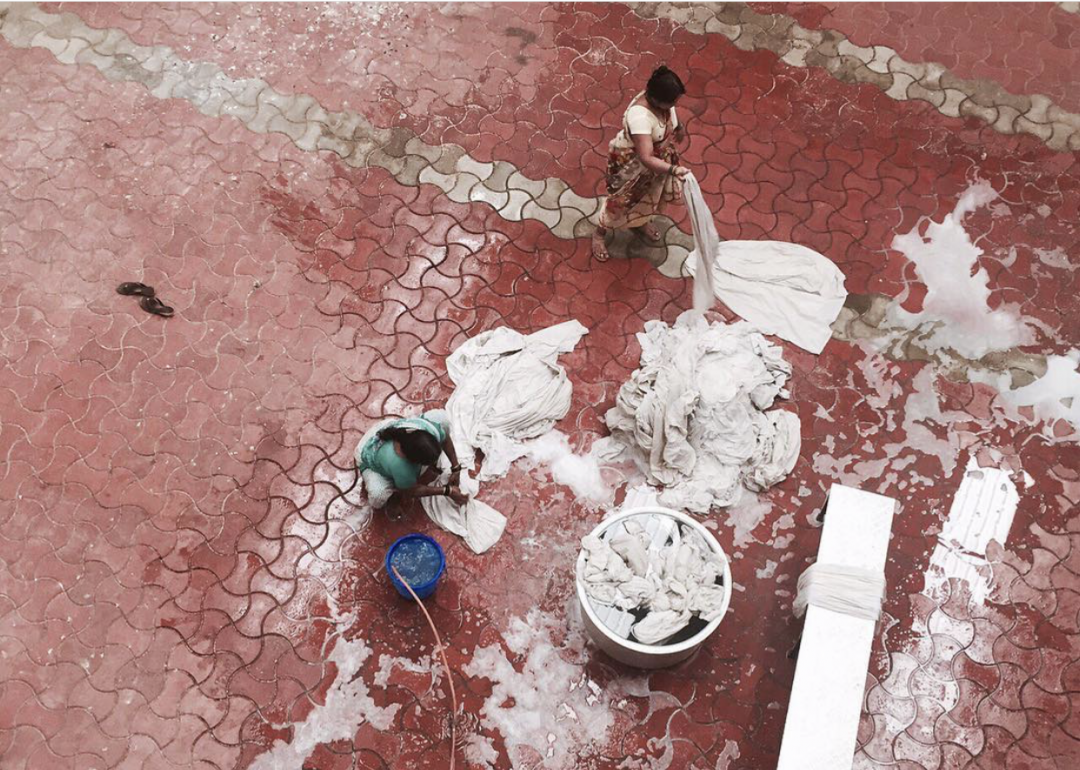 Today, I got down on my knees and did something I’m slightly ashamed to say… I haven’t done in a very       long time.

I cleaned all the floors in my house.
I scrubbed the corners of the bathrooms, the places that no one sees until they look too closely.
I scoured the kitchen, edge to edge.

It is a privilege (under normal circumstances) to be able to outsource this work.
At the same time, it was on my knees that felt right on this day.

On one’s knees there is humility. It’s the way we pray; it’s where we play with our babies, and where we come to understand what vulnerability really means. It’s often where we cry.

There’s something about being close to the ground, the earth. The act of lowering our bodies also lowers our walls, our egos, our pride.

Once, when I was in India, I saw something that I still think of often.

I was sitting in the courtyard of a shrine, an open square surrounded by an ancient wall whose center housed a divine Hindi god. There are hundreds like them.

Thousands of people, of all socioeconomic groups, were making their way in and out. The very, very poor — shoeless, toothless, penniless — stood alongside the very rich, with expensive watches and waiting drivers. Some were moving slowly, others in a rush. Worship, in India is a daily devotional practice — a stop on the way to work as much as a holy family outing.

I watched as throngs of people poured out of every doorway, walking briskly past the others who had prostrated themselves in front of the structure itself — some, kneeling, noses down, others laid out on their bellies, arms outstretched in supplication. This chaotic scene plays out often there — to the curiosity of Westerners who can’t imagine ourselves face down in our own sacred venues — which might be church for some, or a concert for others.

A young man, maybe 20-years old, in his rush to leave, inadvertently stepped on the arm of an elder woman still in the process of worship. With her face down buried into the stone, she most certainly felt the injury — it was the full weight of his body on her frail wrist. But she didn’t move.

Realizing his miscalculation in space, he quickly turned back to her, and without registering a second of contemplation — he got down on his knees, and kissed both souls of her aged, bare, blackened feet. As quickly as he had knelt, I was no sooner looking at the back of his checked shirt, pushing the turn style to leave.

She never looked up.
And he never turned to see if she did.

What will it take for us…to get here?
To feel this sense of connectedness?

Something passed between them, yet no thanks was given, no validation sought. But humanity, nonetheless, was undeniably present. The act itself, of course, transcended all practical precaution for hygiene, a behavior that has become part of our daily consciousness at this moment — a practice that could (in fact) determine life or death.

But even at that moment, it wasn’t the act itself I hoped to replicate, but more that such instinctual reverence for a complete stranger could be second nature… that seemed worth emulating.

I chose my knees today because I think it was the only place that matched my emotional hillside.

It was devotion.
It was humility.
It was surrender.